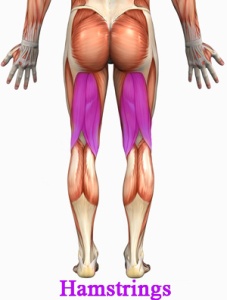 I came across this really interesting article on how hamstrings can be a cause of back pain from The Back Pain Authority.

They say that back pain from hamstrings can occur due to pelvic misalignment, muscle imbalances and changes to spinal curvature all enacted by the interactions of the major posterior leg muscles and tendons. Hamstrings have long been implicated in the involvement of many lower back pain complaints and we now know for sure that there are various causative processes that can create pain due to problems involving these major muscular tissues.

There has been a growing trend towards blaming the hamstrings as being causative or contributory in many low back pain problems.  The diagnosis is most often made by sports medicine specialists, physical therapists, chiropractors and other hands-on practitioners who can actually visualize the changes in posture and gait caused by tight hamstrings, as well as feel the actual tautness in the muscular tissues.  On the other hand, hamstring involvement in lower back pain is rarely suspected or suggested by more traditional back pain specialists, such as orthopedists and neurologists, although this is not an absolute rule.