Can Homeopathy play a [art in healing chronic conditions? I think this is a very good question.

I think it’s a shame that some people talk about homoeopathy as though it was money down the drain as I’m sure most of the ones questioning it have not even tried it yet. An article in The Mail Online Health said that celebrity actress Nadia Sawalha’s eczema drove her to ‘tie her hands to the bedstead’ in an attempt to stop her scratching it, then found that a controversial homoeopathy treatment cleared it up.

A homoeopathic consultant looks at the whole person to choose remedies that are decided on the basis of all aspects and symptoms the patient has. It can help with many acute illnesses, like an earache, fever, flu, tonsillitis, IBS, migraines, anxiety, depression and more. It is stated that remedies are nonaddictive and they have no dangerous side effects and are safe for the elderly, young and during pregnancies. Nadia believed the homoeopathic cream, ‘mezereum’, a Eurasian shrub extract, traditionally used to heal skin complaints, was what she could only describe as ‘biblical’, as over 48 hours, she watched as her skin renewed itself.

There are, however, still lots of sceptics, with a Professor in Edinburgh, and Pharmacists questioning that there is no evidence or scientific basis to suggest homoeopathy is an effective treatment for eczema. I guess Nadia thinks differently…

Homoeopathy is a form of alternative medicine founded by a German physician Samuel Hahnemann, himself an orthodox Doctor (MD), in 1796. The name is derived from two Greek words that mean “like a disease”, basically “like cures like”. He established the law of ‘similar similibus curentur’ – the law of similitude – (disorders can be cured with substances which behave in a similar way). When a poison is causing certain symptoms, the same poison, but very highly-diluted, can be used to cure these symptoms. Samuel Hahnemann was disliked by pharmacists at that time, who were the traditional suppliers of medicines to doctors, because he only needed one ingredient at a time, whereas pharmacists needed hundreds of ingredients.

He was then banned from working in different regions so he had to move his family from village to village to escape legal threats and injunctions from the medical establishment. Homoeopathy is the third most popular method of healing in India, after conventional medicine and Ayurveda. Nine million people use it in Brazil and in some developing countries like India, Mexico and Cuba, where homoeopathy is integrated into the system of healthcare. In countries such as India, Mexico, Pakistan and South Africa, homoeopathy is on an equal level with conventional medicine, and it is also recognised in countries like Bangladesh, Singapore, Dubai, and Malaysia etc. It is also recognised in Germany, Switzerland and Canada and in countries such as Australia and New Zealand, where it’s developing into a complete healthcare profession and is receiving government recognition. The theory is actually quite simple, as they just take all the patient’s symptoms, and then find a matching remedy, i.e., something that could cause similar symptoms in a healthy person.

A qualified and experienced homoeopath can sometimes cure serious chronic diseases when traditional medicine can do nothing further, and when used in the right way. The treatments are made from the elements found in nature, i.e., mineral, animal and plant extracts, which are the bases of the remedies which are then diluted to avoid side-effects. By knowing the toxic effects of herb, mineral or animal fluid, a homoeopath can then turn it into a homoeopathic remedy which will then have the direct opposite effect and with no side effects or reactions. Apparently, according to an article in Woman & Home, ‘a whole cast list of celebs, and the Queen’ use Homoeopathy for treating different conditions. Homoeopathy is a 200-year-old holistic healing method, where a substance that causes symptoms when it’s taken in large doses, can when used in highly-diluted amounts, treat those same symptoms. You can buy remedies over the counter, but for a serious condition, it’s best if you visit a Homoeopath to discuss your needs. You usually need at least one or two different types of homoeopathic medicine to help with your problems, but it’s usually not too expensive and has no known side-effects. Some Homoeopathic websites to check out include ‘The Faculty of Homoeopathy’, British Homeopathic Association, and ‘The Society of Homoeopaths’,

You can buy your remedies at ‘Ainsworths’ who reputedly hold royal warrants from the Queen and Prince Charles for their homoeopathic remedies. ‘‘Helios Homepage’ which has great first-aid kits and soothing creams. My choice of book is ‘The Complete Homoeopathy Handbook’ by Miranda Castro, a guide to everyday health healthcare, and an absolutely brilliant complete book on Homeopathy.

Personally, I have never tried Homeopathy for any type of pain but I would love to hear from anyone who may have given it a go. Have any of my readers tried a homoeopathic remedy and was it successful?

Balneotherapy is one of the oldest therapies for pain relief. The term ‘balneo’ comes from the Latin word, balneum, meaning bath. Balneotherapy is a form of hydrotherapy which involves bathing in mineral water or warm water.

A study compared bathing in mineral water to plain tap water in 60 people with lower back pain and Fibromyalgia. They found that mineral water containing sulphur was superior in reducing pain and improving mobility, compared with tap water.

Pain Source point out that the specifics as to how balneotherapy alleviates the symptoms of fibromyalgia are complex, and not completely known. Bathing in mineral or thermal water may have beneficial effects that result from a combination of mechanical, thermal and chemical factors. Balneotherapy offers effective treatment methods that can be adapted to the abilities and preferences of each patient, without showing significant side effects. Balneotherapy for fibromyalgia cannot substitute conventional therapy, but can represent a complementary approach or an alternative for patients who do not tolerate pharmacological treatments.

As there are many different types of healing baths, balneotherapy takes many different forms. This includes everything from whirlpools and affusion showers to mineral, thermal, cold, or hydrobaths.

Whether given in a healing bath or pool, balneotherapy always involves the use of water for therapeutic purposes. Wraps may also be used such as those consisting of algae, mud or peat as these can help detoxify and enrich the skin. Water from hot springs or mineral or sea water may be used to ease disharmony within the body. Different forms of treatment are used for different conditions and there is considerable variety.

The Fit Map explains that “Water can be used to greatly enhance your sense of well being. These forms of treatment are particularly good for easing physical pain caused by muscle strain or arthritis. It’s often used as an important part of physio and to help people recover after an injury or operation. 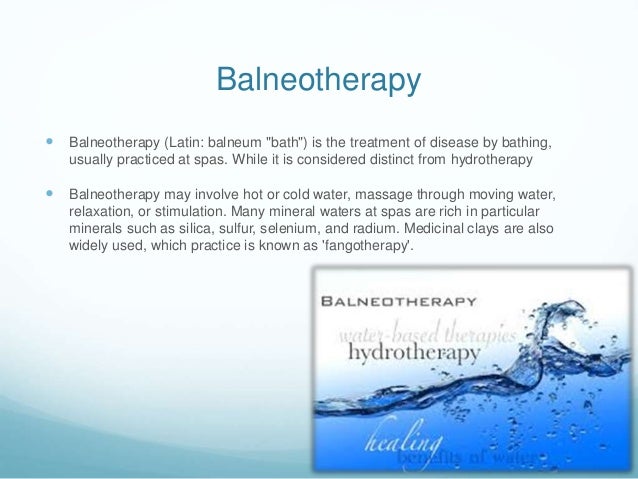 It’s also good for back pains and increasing mobility. Water can help to boost the immune system in order to help fight off illness and infection. These treatments have been used to help stroke victims or those suffering from serious conditions such as Parkinson’s disease.

They can help you to relax and lower stress levels. Warm baths are particularly good for easing soreness or stiffness and for calming your nerves.

Cold baths on the other hand can help increase circulation and are good for vitality and increased energy. Water is one of the essential ingredients of life and the power of these treatments to improve your physical and mental health cannot be overestimated.”

Therapies Guide UK has a list of Balneotherapists in the UK, and a number of Hotels in Europe advertise they have this available as well as some Spa’s in the UK like Chapney’s Health Spa’s